ARTAI is an insurance brokerage that was born in Galicia in 1993 by the hand of a group of professionals from the insurance sector as a private and independent company specialized in the service of companies in the marine-fishing, wood and automotive sectors. We aim to become a leading company in the sector in Spain.

In this initial stage, ARTAI starts a plan of geographical expansion by opening offices in Galicia, Andalucía, Levante and Madrid.

In a second stage, in 2008, ARTAI acquired an insurance brokerage in León which provides a highly specialized professional team in the passenger transport sector and continued with its expansion plan by opening offices in Asturias, Baleares and Barcelona.

It was in 2012, when ARTAI again acquires an insurance brokerage. This time in Pamplona. The professional team that integrates also brings a deep knowledge in credit insurance.

And in 2015, ARTAI reinforces its leadership with the acquisition of another insurance brokerage. This time in Santiago de Compostela. It is a brokerage specialized in risks of companies and public administrations, which also incorporates a broad /deep development of products for the University Community.

For this year 2017, the target of ARTAI is to continue to strengthen its network of offices and especially in Madrid and Barcelona, improving and positioning the visibility of the ARTAI brand throughout the national territory.

Parallel in time, in the international sphere, and in line with our objective of proximity to the client, in 2005 we founded Artai Argentina to provide support and a local service to the companies of the fishing sector that were installed in that country. Artai Argentina had a relevant development and in a short time it was among the first brokerages in the country. Recently ARTAI decided to take on new projects and to disinvest in that country by keeping, in common agreement with the local partners, the service to our clients and the Artai Argentina brand.

Also in 2016 and continuing our vocation of customer proximity, we have integrated as a partner of Gallagher Global Alliance, international network of Arthur J. Gallagher, one of the largest brokers in the world. The incorporation of ARTAI to this network with presence in more than 180 countries, reinforces the local support service to its clients around the world.

At present, RTAI keeps the initial line of its project, and wants to distinguish itself as the first independent and private brokerage in Spain, specialized in company insurance from a personalized, differential service model, based on knowledge and experience of its professionals, with a firm and close commitment with its clients.

Do you want to know more?CLICK HERE 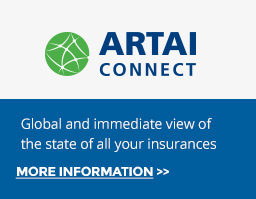